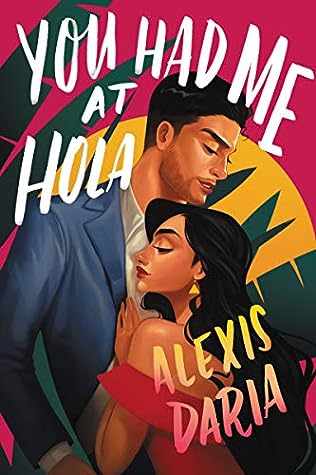 You Had Me at Hola
Author: Alexis Daria
Expected Publication Date: July 7, 2020
Check it Out: Goodreads

Leading Ladies do not end up on tabloid covers.

After a messy public breakup, soap opera darling Jasmine Lin Rodriguez finds her face splashed across the tabloids. When she returns to her hometown of New York City to film the starring role in a bilingual romantic comedy for the number one streaming service in the country, Jasmine figures her new “Leading Lady Plan” should be easy enough to follow—until a casting shake-up pairs her with telenovela hunk Ashton Suárez.

Leading Ladies don’t need a man to be happy.

After his last telenovela character was killed off, Ashton is worried his career is dead as well. Joining this new cast as a last-minute addition will give him the chance to show off his acting chops to American audiences and ping the radar of Hollywood casting agents. To make it work, he’ll need to generate smoking-hot on-screen chemistry with Jasmine. Easier said than done, especially when a disastrous first impression smothers the embers of whatever sexual heat they might have had.

Leading Ladies do not rebound with their new costars.

With their careers on the line, Jasmine and Ashton agree to rehearse in private. But rehearsal leads to kissing, and kissing leads to a behind-the-scenes romance worthy of a soap opera. While their on-screen performance improves, the media spotlight on Jasmine soon threatens to destroy her new image and expose Ashton’s most closely guarded secret.

I have been going back and forth on my rating for this one. First things first, this cover is absolutely stunning! Second, I didn’t love this as I anticipated to. It really sucks when your expectations let you down. I wanted a really cute romance and a look at the background of telenovelas. I got the latter but not the cute romance I wanted.

I had a hard time connecting to the story. Maybe it was the third person POV or the actual flow of the story. I just know that I couldn’t fully emerge myself in it and towards the end, I kept checking my kindle percentage to see how much longer I had.

I enjoyed our main character, Jasmine. She wore her heart on her sleeve and just wanted to be loved. It was relatable because who honestly hasn’t felt like that? No matter how many times she’s been burned, she still opened her heart up to the possibility of love.

“Was it so much to ask for a loving, committed relationship with someone who unconditionally loved and accepted her for who she was?”

Ashton on the other hand never grew on me. He made himself so guarded and unapproachable outside of working. I get that he had a secret that he wanted to protect, but he just came off so distant and it never seemed to change throughout the story. I also didn’t like the way he acted once his secret was revealed. He acted like a little boy who got his feelings hurt rather than a grown man who needed to handle things with a calm head.

With my feelings on Ashton and his actions, you can probably tell that this relationship to me wasn’t a great one. I really kept thinking that Jasmine deserved more. Someone more emotionally available really.

Besides my feelings on the romance and Ashton, I also had issues with the flow of the story. We were switched between Jasmine and Ashton’s story and the show POV that they were shooting. It was hard to really keep up with the change because it was one and the same. What I mean by that is that the show’s storyline seemed to be the same as their story.

All in all, I feel like so many people are going to enjoy this one, it just wasn’t for me.

I received an ARC via Edelweiss for an honest review. The quote was taken from an ARC and is subject to change upon publication.

18 thoughts on “You Had Me at Hola by Alexis Daria”