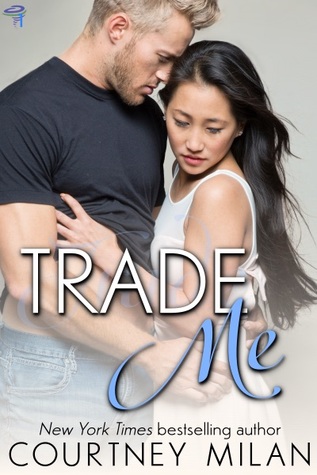 Trade Me
SERIES: Cyclone
by Courtney Milan
My Rating: ⭐⭐⭐

Tina Chen just wants a degree and a job, so her parents never have to worry about making rent again. She has no time for Blake Reynolds, the sexy billionaire who stands to inherit Cyclone Technology. But when he makes an off-hand comment about what it means to be poor, she loses her cool and tells him he couldn’t last a month living her life.

To her shock, Blake offers her a trade: She’ll get his income, his house, his car. In exchange, he’ll work her hours and send money home to her family. No expectations; no future obligations.

But before long, they’re trading not just lives, but secrets, kisses, and heated nights together. No expectations might break Tina’s heart…but Blake’s secrets could ruin her life.

Well, that was underwhelming. Trade Me has been on my TBR for quite some time now, so I was excited to finally get around to reading it. I was pulled in from the cover and the tropes in the synopsis. Interracial relationship and rich guy, poor girl? I was sold! Unfortunately, it didn’t live up to the expectations I planned for it.

Let’s get what I did like about the book out of the way. I like that this story had a diverse cast. Especially that we have an interracial relationship. I haven’t read a lot of books where we get that and it was nice to read about. Also, this books talks a lot about poverty, immigration, and the power of being privileged. I think the best part of the book to me was the relationship that Blake had with his father. Most books I read the guy always has issues with his father. I don’t why that is, but this one stood out to me. Especially the banter between these two!

Now, onto why this mostly didn’t work out for me. I can blame my expectations for part of it. I went in expecting a cute romance. This story tackled more serious topics and I was unaware of that. Don’t misunderstand, there’s nothing wrong with that. I just wasn’t aware and had to put myself in a different mind frame if that makes sense.

As far as characters go, Blake and Tina were okay. I never really connected with them but continued to read anyway. Tina did annoy me with her back and forth. I felt like she kept coming up with the same excuses not to be with Blake but only after she kept pulling him back in. I get that she was scared to fall in love but relationships are scary. They require work and it won’t always be easy.
I didn’t like the serious topics were held. It’s hard to explain without spoiling it. However, I felt as if the issues were swept under the rug and not really dealt with. I wanted there to be more of an ending.

Speaking of an ending, an epilogue would have been nice. True, there is a separate novella that you can purchase, but I just would have liked to have to story wrapped up.

All in all, I just wanted a bit more from this one. I was let down by the characters and how some of the issues were handled. As far as finishing the series goes, I don’t think I will be. I wasn’t wowed and I don’t care enough about the characters to read anymore.