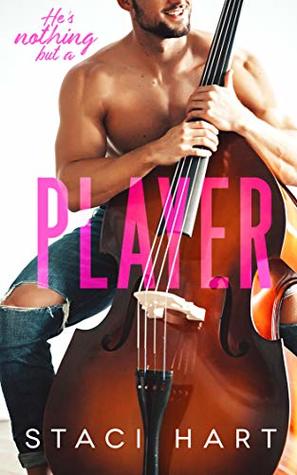 Player
by Staci Hart
My Rating: ⭐⭐⭐⭐
Check it Out: Goodreads | Amazon (KU)

He plays the bass with expert fingers. He plays women with intoxicating charm. And he’ll play me with the ease of a virtuoso.

Who better to teach me to play than the master himself?

I’m his model student, front row, pencil sharp. Pick up lines? I’ve got them. Free drinks? By the dozen. Kissing? Let me grab my chapstick.

But the most valuable lesson I’ve learned is that there’s so much I don’t know. Like why his touch sets off a chain reaction straight to my nethers. Or how I’m certain each kiss is the best I’ll ever have, until the moment his lips take mine again.

There’s so much I don’t know.
Like the fact that I’m only a bet.
But we are what we are. He’s a player, through and through.

And I’m the fool who fell in love with him.

I was so happy to have Val’s story and I adored it! Val was an outgoing curvy girl and I couldn’t wait to read about her.

Once again, my favorite thing about this series of standalone is this group of friends. These four girls are a group of friends that I wish I had. They were always there for each other and were always supportive. Let me also not forget to mention the diversity again. We had Val who was a Latina and Sam who was Lebanese.

Val’s struggles are a subject that hit home for me. I’m also a bigger girl who had and still has issues with confidence and weight. I think Staci did a job at portraying that through Val’s character. However, I didn’t like the way she idolized Sam and was happy when he called her on it. He was just an average guy. Was he attractive? Yes, but that doesn’t mean that you have to hold him to this pedestal of being amazing.

Can I say that Sam is somebody that I wish met in my early twenties? Even though he was a “player”, he never played Val. his feelings were true and I loved how he never failed to tell her she was beautiful.

“You call them flaws. I call it a signature. Because there is no one like you, not in the whole world. And I will love every curse until you realize you love them, too. “

Yes, the bet issue was a bad call, but his heart was in the right place. All he ever wanted was to do right by Val and show her that she was worth anything she wanted in the world. It was hard not to swoon over him.

“The girls you idolize and idealize and compare yourself to so very rarely interest me. But you interest me. I just hope one day you’ll believe me when I say it.”

Val and Sam together had some MAJOR chemistry from the beginning! Reading about Val becoming more comfortable with her body and her willingness to show everything to Sam made my heart so happy.

Overall, I enjoyed this standalone and I can’t wait for the next book, Work in Progress. It’s Amelia’s story and as of the day I’m typing this, it comes on tomorrow. Just know that as soon as I get some free time I’m binging it!

14 thoughts on “Player by Staci Hart”